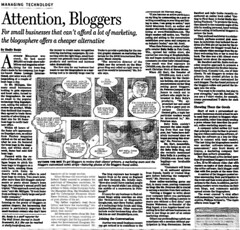 One of my best friends made a career change from tech journalism to the politics beat.

He’s never been happier. Yet each time he speaks of his ‘past life’ with derision and condescension, I get a little bit angry.

There is this misguided perception that if you don’t cover hard news, you’re not a journalist.

That if you don’t write about politics or the like, you’re not a real reporter.

I beg to differ. It’s not the subject that matters; it’s the job scope. No matter what you report on, a journalist is called on to report facts and be held to certain standards.

Unlike my friend, I loved tech journalism. What fascinated me was the pace of innovation, and how technology became obsolete in a blink of an eye.

I believed that technology exists to improve our quality of life and the Internet is testament to that. It has opened up the flow of information and provided a cheaper, more efficient mode of communication that connects people from all over the world.

Business journalism is usually considered boring – nothing but numbers and profit balance sheets. If you read the Wall Street Journal, the quality of its journalism warrants having to pay for its online news. There is a precision and attention to detail I wish more news journalists practised.

One important role business journos have is to keep businesses honest. Corporations know that their performance, their business practises and operations are being watched and analysed. Widespread coverage of the Enron scandal brought attention to the need for more transparency and public accountability in the corporate world.

“But what about writers for gossip rags? Are they journalists?” Such publications that peddle in hearsay and fabrications aren’t places for people to practise journalism as much as they’re made for populist entertainment.

My point here is: just because a reporter is covering a ‘softer’ beat such as tech, business or even, heck, lifestyle, it doesn’t mean he’s not putting in as much effort. That what they’re writing about matters less and that they don’t deserve to be called journalists.

Instead of looking down our noses at other journalists, we should be acknowledging the struggles all journalists face. Crap pay, members of the public who don’t realise nor appreciate the effort and hardship that goes into creating content and for some of us, the loom of arrests or lawsuits.

I am a writer who tries her hardest to be a journalist and sometimes, I wonder if I’m letting the title down. But one thing’s for sure – I refuse to deride others who are doing their darndest best to do the same.