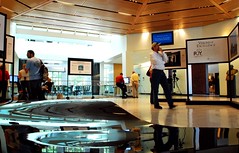 My third month into PR, and I’ve already been asked if I missed journalism.

I miss the people I worked with – four years of sharing tough times and crazy times (like almost getting killed in a bus crash) does leave you feeling attached.

I miss having people around me; it gets lonely sometimes, just me and my computer.

But I don’t miss practicing journalism in Malaysia. If you look at it as a day job – churn copy, submit before deadline, collect your pay then maybe it’ll feel like a job like any other. If you care about what you write, if you have ideals about standards, truth, and telling a really good story then prepare to be constantly waging battles you’ll more often lose than win.

Unfortunately writing isn’t really respected in this country. The perception is that anyone can write.  Why hire professionals? Yes, maybe you can write but can you write well? That makes all the difference.

When I joined PR, my German friend, Rolf, laughed and congratulated me on joining the ranks of professional liars.

When you’re a tech reviewer in Malaysia, you get used to being called a liar. The perception was that we would write good reviews for our advertisers. Million dollar question: was that true? I can honestly say I never lied about a product, and never said I liked it if I didn’t.

But reviewers weren’t allowed to ever ‘slam’ a product. Still, if they had any reservations, they had to write their misgivings as opinion and not present it as fact. “In other words, hedging-lah,” my deputy said.  I answered, “No it’s being diplomatic.” And if we ever encountered a product of extreme sucktitude, we politely told clients, “We don’t think this measures up to the standards of your previous offerings so it really doesn’t do your brand justice.” And declined to review it. Oh yeah, I was getting lots of PR practice with The Mag.

In PR, the goal is to get the message across. Perception of said message, unfortunately, is not something we can always control. People have minds but what PR does is to ensure the message the client wants out is the message that actually does come out.

“This is who we are and this is what we’re saying.” Succinctly, that is what PR is communicating about and for clients.

Interestingly, Text 100’s put out a release on a study that claims PR is more powerful than advertising in building brands.

“The findings of the Media Prominence Study, which calculates brand value based on Interbrand’s 2008 Best Global Brands report, show that on average 27 percent of brand value is tied to how often the brand name appears in the press. In industries that involve more research before purchases are made, public relations can account for nearly half of brand value. For example, in the computing industry, media prominence accounted for 47 percent of brand value, or 16 times that of the personal care industry.

This study underscores the importance of managing and growing brand value through public relations efforts during a recession. The more complex a product is to a buyer, the more likely they are to research the product category and to look for information they can trust – from editorial content rather than advertisements.”

And here’s a note from Poynter.org’s Butch Ward on switching from journalism to PR:

“While I’m never happy to learn that people are leaving journalism — especially when the decision is made for them — I’m now able to reassure them that their abilities to write, to gather and to organize information, and to think analytically, will serve them well in the business world.

And, I can assure them one other thing: PR — like journalism — can be a very honorable way to spend one’s life.”

So far, I’ve been lucky enough to find that it’s true.