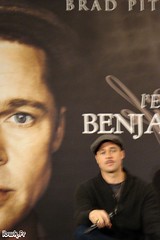 Just came back from watching The Curious Case of Benjamin Button with Irene. It wasn’t a film I’d been excited about watching because the storyline just seemed too ‘out there’. Surprisingly, the script worked and Brad Pitt was incredibly watchable. There’s even this one scene that reminds us just why Pitt is such a box office draw – the man is just almost too beautiful to be real.

And the romance between Pitt’s protaganist and Cate Blanchett’s Daisy is palpable, believable and very well-written. Blanchett is brilliant, perfectly depicting her character’s different life stages, from the flighty, giddy 20-something to the tempered, weary, middle-aged and then finally to her final moments.

“You have to let go.” That phrase from the movie haunts me because it’s so true. And I’ve had so much letting go in my life, to the point I find it hard to hold on to anything anymore and yet get so torn up about some losses.

My parents lost the house when I was little; I lost the comforts of never worrying about material things. So I never bothered too much about money or ‘stuff’ because I knew that they go, they probably can be replaced and best not to hoard or hold on to things.

But attachments are harder. I am slightly upset with myself that I’m still not quite over the ‘breakup’ I had in January. We only dated a month and sometimes, it still hurts. I find myself wondering why I can’t so easily get over something that I should be over by now – it was only a month, after all.

What hurts just as much is knowing that he’s likely not affected by it at all. That he doesn’t think about it, or me, that he’s swallowed up by his work and myriad other attachments. That I was just something shiny that kept his attention for a while and then once I no longer filled a temporary void, I was discarded like used gum.

I wonder if I’ve ever used anyone that way…I don’t think so. Sure, I’ve been tempted but I could never do that to anyone. If I know that I just don’t feel enough to do more than hang out with a person, I don’t lead them on. I draw the lines and even if I have to be blunt or cruel, I tell them straight off that I’m not interested. There was this one guy I went to dinner with just once and he was enamoured. Then came the constant texts which I gave terse replies to – but he didn’t get the hint until I finally just told him that I didn’t want to see him. I was single, jobless and transport-less. It would have been easy to use him as an errand boy or driver, just have him temp until I found someone real for the job.

But that’s never how I do it. I abhor the notion of using people as ‘fillers’. But I knew I would be one, right from the start. That I wasn’t The One, just Some One. And I don’t know whether it’s not really just my ego hurting and not my heart.

Nothing lasts. I was mostly happy for a month. Of laughter and music and long conversations. And it ended. I was replaced. And it hurt. I’m still not over it, but I’m getting there.

Riding a bike will also involve letting go – learning to coast, learning to stop pressing the brakes, and learning to let my body guide turns. In my head, I know how it all works but the practise is a lot more tricky. I guess it goes for matters of the heart just as well.