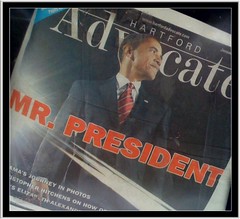 It’s curious, the wave of excitement that’s cresting around the world. My friends are happily buzzing about Barack Obama’s inauguration, on Twitter and Facebook.

Funny how I don’t have to call and ask people what they’re doing tonight on this historic moment as the world shares in the excitement. I know so many of them will be watching the television or getting live feeds from the Internet.

I don’t feel all that excited right now. Yes, I was teary eyed when all that happened but right now, today, it’s just witnessing the inevitable and it’s just his first step towards ushering in a new tide for the US of A.

What the world needs right now is hope. The economy’s crumbling in many countries; so many are dead, dying in war and famine. So tonight, let Barack Obama be that beacon to light up the darkness that threatens to engulf us in despair. Shine on, Mr. Obama and let us hope that you are strong enough to bear that light – and not die out like a brief candle.