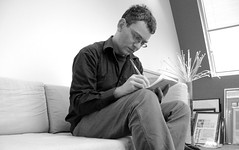 Just around this time last year my world was in the washing machine equivalent of a spin cycle.

Everything was upside down. My job, my friendships, my love life.

I think NaNoWriMo saved my life then.

All I’d expected was to meet a new motley crew of people to nag for 30 days to finish their novels.

I hadn’t expected to meet the next best thing to family, a group of people whose love for the written word would somehow also inspire strong devotion and friendship.

Talking to Calvin last night over dinner, I thought again about how they’d appeared just in time to fill a huge void left by just one person.

It was a sign of imbalance – that it really wasn’t right that one person could take up so much room in my heart, in my life, in my thinking.

When I was so easily replaced. And the part about being replaced hurts when I think about it. But maybe I was just deluded in the first place, believing in something that never really existed, mired in the illusion of inequal regard.

In a week, I’ll be starting a new novel and meeting another bunch of new faces. But what cheers me is who will be coming along for the ride. I ‘see’ them everyday in the Gmail thread that would not die. For us Gmail is our pool of meeting, where we either skirt the edges or jump right in.

Never think that in your life you’ll have just one kindred spirit. Don’t be like me, needing my heart to be ripped right open before it had space to let other people in. Opening your heart, some say, is risky. But it’s far more painful to close it off and then have the stitches taken apart when the people you allowed exclusive access make an exit.

Once,I said I only had enough time and energy to devote to very few people. Now, my walls are down. My heart is open. I’ve laid out the Welcome mat.